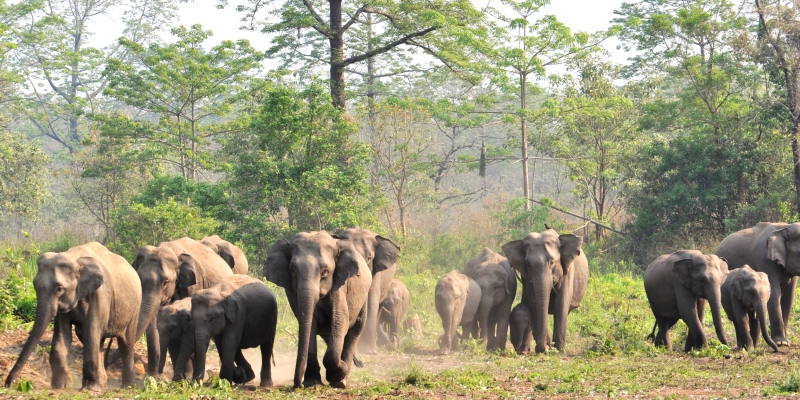 Bhutan's Crown Jewel, the Manas National Park represents the largest example of tropical and sub-tropical ecosystems in Bhutan. With its thousands of animal and plant species, many globally endangered, it is not only the most diverse protected area in the Kingdom but also one of the world's biologically outstanding sites.

Lying in south central Bhutan, Manas is connected at the southern border with India's Manas Tiger Reserve, a World Heritage Site. To the north it borders the Jigme Singye Wangchuck National Park. Royal Manas was designated a wildlife sanctuary in 1966 making it Bhutan's oldest protected area. The area was upgraded to a National Park in 1993.

There are wide climate variations in Royal Manas. The May-September monsoons bring up to 5,000mm of rain. Rainfall is negligible in winter and the climate is extremely pleasant from November till February.

More than 365 species of birds have been officially recorded in Royal Manas National Park with an additional 200 believed to be in residence. Species found here include the globally threatened rufous-necked hornbill, Pallas fishing eagle, great white-bellied heron, spotted wren-babbler, blue-headed rock thrush and emerald cuckoo. Many of the park's more than 900 types of plants have commercial, medicinal, traditional and religious significance.