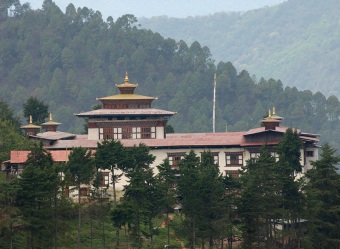 About Mongar : The Bastion of the Zhongarps

Mongar is Bhutan's eastern commercial centre. Like other towns in the East, Mongar is located on the top of a hill. The Dzong provides an exhilarating vista and houses many ancient artefacts.

The landscape is spectacular with stark cliffs, gorges and dense conifer forests. The region is known for its weavings, with its textiles and fabrics considered some of the best in the country. The district covers an area of 1,954 sq.kms with elevations ranging from 400m to 4,000m and has a population of about 38,000. The landscape is spectacular with stark cliffs an gorges and dense conifer forests. It was known in the past as the bastion of the Zhongarps for it produced some of the finest administrators in the country whose descendants still continues to lay an active part in the political scene of Bhutan.

Popular tourist attractions in Mongar are :

Although built in the 1930s and one of Bhutanâ€™s newest dzongs, it is constructed in the same way as all earlier dzongs, without plans or nails. However unlike the earlier Dzongs, that are located in strategic positions, Mongar Dzong is located on a small gentle slopy area just above the town. A visit to Mongar Dzong shows one how traditional Bhutanese architecture has continued to thrive through the centuries.

The ruin of Zhongar Dzong endures to this day as a testimony to the skill of its builders, most notably the renowned master craftsman, Zowo Balip. It is located on a hilltop overlooking the village of Themnangbi and is visible as one descends to Lingmenthang from the highway. Built in the 17th century, the Dzong is believed to have been built at a site where the master architect Zow Balip saw a white bowl. Embedded inside is a life frozen in time, a wealth of history that can be still recounted orally by those who also heard it from their grandparents. A visit to the ruins can be a memorable experience and will give you a sense of the medieval Bhutanese administration.

One of the most notable religious sites is the Dramitse Lhakhang built in the 16th century by Ani Cheten Zangmo, the daughter of the renowned terton Pema Lingpa. The Dramitse Ngacham or the "Dance of the Drums of Dramitse," was born in this lhakhang in the 16th century. Today, it is a popular dance performed at all major festivals. It is also on the esteemed UNESCO World Heritage list.

Another sacred site in the district is the renowned Aja Ney where pilgrims from all other parts of Bhutan converge to receive blessings and wash away their sins. A rock that bears 100 renditions of the sacred syllable "Aa," is said to have been discovered by Guru Padmasambhava. It is located at an altitude of more than 3,500 meters and falls under Ngatsang geog. It is approximately a two days trek from Serzhong village.

The Yagang lhakhang in a small village next to the town is another sacred monument in the Dzongkhag. It was built in the 16th century by Sangdag, the youngest son of Terton Pema Lingpa. It was built after having built the Kupijigtsam Lhakhang in Yangneer village in Trashigang. Today, the lhakhang plays an important role in the religious life of the people.

A walk to this village will truly be a pleasant trip. Situated about two hours walk from the Dzong through gentle slopes amongst pine trees, this village is known throughout the country for its woven textile, the Kishuthara. A culture that has evolved over the years is a row of women in a makeshift textile cottage, weaving intricate designs and patterns. Picking up a Kishuthara will be much cheaper than buying one from the handicraft shops in the capital.